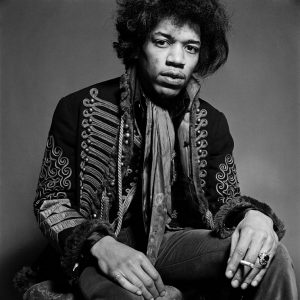 The non-pareil master of electric guitar is a highly unusual case. He released only three studio albums in his lifetime – one good, two often cited among the greatest of all time. We also have many recordings for a planned fourth album that, over the years, have been sliced and diced in various ways (I prefer 1971’s The Cry of Love). We’ve also heard live sets by the truckload, many superb, some definitive. Sure, he made the mistake of dying on his record company, but this latter category exists because Hendrix is without question rock music’s greatest improviser.

As Wolfman Jack, another staple of my misspent youth, howled from The Mighty 1090, here are the platters that matter:

In England, where Hendrix had to go to get “discovered” because his music was too “far out” for us Yanks, this was a standalone single rather than an album track (American record companies routinely rearranged the track listing of UK albums to include orphaned hits, for which we should all be thankful). But for all practical purposes, this was the incendiary freakout that got him noticed on both sides of the pond. The opening two guitar notes are a “tritone,” a melodic interval banned during the Spanish Inquisition because it was claimed to be a musical device akin to “ringing Satan’s doorbell” – an attention-getter as potent as Densmore’s drumming on “Break on Through.” From there we launch into the main riff, a dominant seventh sharp ninth chord, which guitarists now simply call the “Hendrix” chord, wild and dissonant, Hendrix drenched in feedback. Never had rock music been so musically daring. ‘Scusing yourself to kiss the sky seems almost like an afterthought. 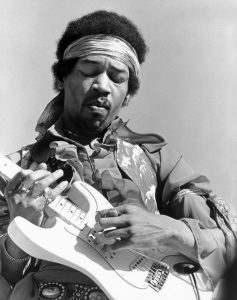 We often forget how strong Jimi’s ballads are, how unbearably lovely, and how much they owe to the R&B musicians he came up with, in this case fellow guitar great Curtis Mayfield. Otherworldly, adorned with a glockenspiel, Jimi sings to one more guardian angel floating in the clouds, typical of the ethereal women who populated his songs. Also of note: the gorgeous version on Derek & the Dominos’ Layla and Assorted Love Songs, which Eric Clapton cut almost immediately after he heard his friend had passed.

There are two versions of this song. First is the classic “short” version that ends 1968’s benchmark Electric Ladyland, and appears on most of Jimi’s compilations. Also included on the original studio album is this fifteen-minute jaw dropper recorded live with Hendrix regular Mitch Mitchell on drums, Jefferson Airplane’s Jack Casady on bass, and Traffic’s Steve Winwood on organ — a spectacular second banana. A wild homage to Muddy Waters that completely transcends the source material, Hendrix first brags with words, then proves his boasts with some of the most awe-inspiring guitar playing ever recorded. Sit close enough to the speakers and you’ll be guaranteed a contact high. When the assembled studio onlookers spontaneously burst into applause, you’ll find yourself joining in. 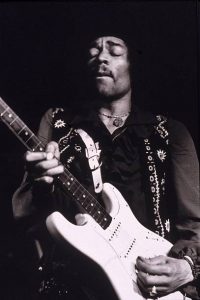 In many ways, we have Hendrix to thank for the modern cover version. Roger McGuinn certainly pulled Bob Dylan into the rock and roll idiom via the Byrds’ seminal “Mr. Tambourine Man,” “My Back Pages,” and others. However, this apocalyptic barn burner was altogether more radical, so much so that bassist Noel Redding gave up, leaving Hendrix to overdub his part — along with myriad guitars storming into your eardrums from both stereo channels, inside your skull, from outer space. Hendrix’s re-imagining so completely dominates the public consciousness that Bob Dylan only performs the song “plugged-in” to this day. 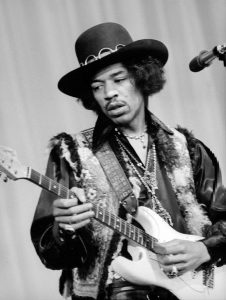 “Aw shucks, I loooooove you” — who else but Hendrix could offhandedly sing something so goofy while shredding his six-string like no one before or since?  Faced with the daunting prospect of performing a set at the celebrated 1967 Monterey Pop Festival (the recording was released posthumously in 2007) before the Who, another live act known for stunning audiences, Hendrix pulled a trick comparable to James Brown’s legendary antics preceding the Stones at the TAMI Show. He easily upstaged guitar destroyer Pete Townshend by taking out a canister of lighter fluid and setting his Fender on fire at this number’s climax. True, you can’t actually see this act on record. But you can certainly hear this sonic pioneer dragging the Troggs classic through waves of feedback and noise, inventing New York art punk decades in advance.