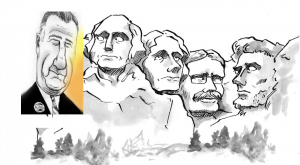 artist rendering of the proposed addition to Mt. Rushmore

For nearly two decades, Satan drifted up and down the Strip, playing half the cocktail lounges in Vegas. The last couple of months, he’d headlined a revue at the Tahitian Princess’s Tiki Lounge as Johnny Mañana. He worked afternoons and early evenings before The Fab Faux, a Beatles tribute band, came on at eight. He was there now, winding down his second set with a medley of Rat Pack hits. He finished with an especially over-the-top cover of Sinatra’s “My Way,” tugged curtly on the brim of his black fedora to acknowledge the smattering of applause, and made his way to the stool where he regularly caroused between sets. Crozier, the beefy ex-sailor tending bar, had a tray of drinks waiting.

Satan raised a shot to eye level and watched shards of ice dance in the dimly lit room. The recipe was an incendiary concoction of his own invention, dubbed a Freezer Burn during a particularly rowdy evening with several Dallas Cowboy cheerleaders. It was equal parts Stoli pepper vodka and cinnamon schnapps, both right out of the deep freeze, spiked with Tabasco. He had, after numerous failed attempts, finally succeeded in teaching Crozier to make them just right.

Satan glanced up, catching his reflection in the mirror behind the bar. He had a narrow, pinched face, a pencil-thin mustache, and jet-black hair combed straight back. Devilishly handsome in a sleazy, bad boy sort of way, he was pretty much a regular guy, except he tended to make love with his socks on, having figured out several millennia back women found the whole cloven-hoof-thing a real turn off.

So begins the sidesplitting sequel to Mr Mojo Risin. Satan, a deranged Senator, and a thermonuclear weapons designer with a couple of suitcase nukes walk into a bar. Sounds like the beginning of an off-color joke, right? The whole thing would be funnier if the punch line wasn’t a sizable chunk of southern Nevada and a million hapless souls reduced to radioactive rubble in a hot millisecond.

In a scheme to extort billions from Uncle Sam, the Dark Lord and his friends are threatening to nuke Las Vegas and turn some very expensive casino real estate into ground zero. Time is short. Local law enforcement and the FBI are playing catch-up. The fat lady might not be singing yet, but she’s backstage warming her pipes with a nuclear blowtorch. Only Morrison, Elvis, Hendrix and their oddball collection of allies stand between Sin City and Armageddon.

“I cannot tell a lie. This book’s the love child of Carl Hiaasen’s wacky cynicism and the subversive whimsy of Tom Robbins.”

“A joyful celebration of life, liberty, and the pursuit of happy hour.”

“This story grabbed me by the funny bone and my heart and mind soon followed.”

“He can compress the most words into the smallest ideas better than any man I ever read.”

“Agnew on Mt Rushmore is a stoner flashback as revealing as Deep Throat.”

“A tell-all book for the nattering, nabobs of negativism.”

“Even the most crackpot ideas have a lunatic fringe, and this is a book from their biographer.”

“My favorite part was when Johnny was going to cut off his ear and mail it to the hooker.”

“Some books are fit only for lining the bottom of bird cages.”

“I wonder how much I can get for his kidneys on e-Bay?”

“Jim,” Sparkle called when Morrison was nearly to the kitchen. “No more middle-aged children’s crusades, okay?”

He held up his right hand, fingers together, thumb and pinkie across his palm as if taking an oath. “Scout’s honor,” he promised.

Her face darkened. “Last night, I dreamed an orange clown car with pink and yellow flowers stopped out front and spilled the entire GLA on the sidewalk.”

“So, your dad finally had the Citroën painted?”

“Jimmy, I’m serious. Vegas has a short memory, but we need to keep a low profile until things blow over.” Sparkle poked her index finger at Morrison to emphasize the point. “No more middle-aged children’s crusades. Promise?”

Morrison smiled softly. “Promise.” He leaned against the doorframe, staring Sparkle’s direction, but was thinking about something Shakespeare wrote: some are born great, and some have greatness thrust upon them. One thing he’d noticed about his life — there was an awful lot of thrusting.

Satan hunched over the bar and lowered his voice to a conspiratorial whisper. All the drinking had loosened his tongue, which, for some inexplicable reason, nobody seemed to notice was forked. “Lucky for you, God doesn’t give pop quizzes. He never struck me as the sort to grade on a curve.”

Satan waved his hand dismissively. “No matter. He already knows how you’d do. It’s how He got the job.” The bartender recoiled, not sure how to react. Satan, sensing his discomfort, leaned closer. “Don’t get all puffed up with self-importance. God wouldn’t bother differentiating between people and blue-green algae.”

“D-D-D-Don’t you think that’s a l-l-l-little harsh?” Crozier’s voice was thin and reedy. His stuttering was getting noticeably worse.

Satan shrugged. “Find a measure of compassion and self-respect and go about your life of quiet desperation. That’s my advice.”

Sparkle and Morrison were nearly home when he realized the blonde in the bar reminded him of a woman he met clubbing before he left for Paris. Her name was Lilith, and they spent a weekend at her Benedict Canyon home.

His leather pants had barely hit the floor when she strolled across the room wearing nothing but a powder blue teddy, unbuttoned down the front. But what captured his undivided attention was not her spectacular body but the elaborate cobra tattoo that slithered around her torso from her upper thigh nearly to her neck. With blood-red eyes and fangs dripping venom, the snake was poised to strike, hovering like a sentinel over her exquisite breasts.

In the early seventies, tattoos were the nearly exclusive domain of bikers and drunken sailors. After they made love, they dozed off. Morrison awoke before her. Their encounter occurred during a phase when he was nearly always drunk or stoned or both, so he couldn’t entirely trust his senses but thought the snake was posed differently every time he looked at it. Mesmerized by the powerful totem, he poured over every detail while she slept.

When she opened her eyes, she smiled coyly and explained the snake was not a tattoo but a birthmark, a comment Morrison found puzzling, but that wasn’t even the strangest thing she said.

Hours later, after they made love and dozed off again, he was propped on one elbow, staring at her breasts when Lilith woke up. She arched her back and raised a nipple to his lips that he obligingly kissed. Grinning wickedly, she settled into her pillow, cradled her perfect breasts in her hands, and asked — how do you like dem apples?

If you’re naive enough to believe in coincidence, you could say things got rolling with a chance encounter at the Tiki Lounge. While Garland Thibodeaux and Johnny Mañana were getting to know each other, two stools down, Newt was nursing a tall drink with a pineapple slice and a paper umbrella. Three men in coveralls with the resort’s logo were setting up equipment for the Fab Faux, a Beatles cover band. When the waitress stopped by, Newt ordered another Mai Tai. He was working up the courage to check-in. His clothes and toothbrush were in the trunk of his Plymouth Fury alongside three suitcase-sized nukes. He’d just gotten out of his car after spending nine hours driving from East Bay and was exhausted and jittery at the same time.

Newt experienced life in a state of sensory deprivation. His detachment from external stimuli bordered on pathological. Everything he saw, heard, smelled, tasted, and felt trickled through his filters in monochromatic shades of gray. With lower highs and higher lows, he was the opposite of manic-depressive: Newt was clinically indifferent. Uncomfortable with the certainty he had too many secrets, he never sought professional help but had a name for his condition borrowed from high school chemistry: steady-state.

He worked at the Lawrence Radiation Lab for more than thirty years and began smuggling out minuscule amounts of enriched uranium and weapons-grade plutonium two decades ago to demonstrate gaps in security procedures. Initially, he intended to share what he was doing with his supervisors and the AEC so more vigorous protocols could be implemented, but the thefts and the secrecy surrounding them became an obsession.

The long-ago falling out with his brother Digby over moral questions about what it meant to build weapons of mass destruction left him wondering about the efficacy of his life’s work. Then in the wee hours one night Newt, a chronic insomniac, was flipping through the channels when he stumbled across the TV ministry of a Senator from Mississippi. He listened, transfixed, filled with an apocalyptic vision of a world calling to be cleansed, wiped clean by the wrath of God. Now, here he was in Sin City, two stools down from that angry prophet.

Satan woke up naked on the floor, his face buried in the gritty carpet. He lifted his head enough for a floor’s-eye view of the evening’s detritus: rumpled piles of clothes, discarded pizza boxes, an empty bottle of Don Julio. A more discerning soul might have glimpsed a pattern.

Satan rolled onto his back and stared at the ceiling. He was contemplating lopping off an ear ala Van Gogh and mailing it to Bambi. The whole ear-cutting thing was not as dramatic as it sounded since it would grow back in a couple of weeks – one of the inherent advantages of being virtually immortal.

But it was Sunday, and on the seventh day, God and the United States Post Office rested. To keep the ear fresh, he’d have to keep it cold. The hotel manager had pulled out the minibar fridge because Satan kept restocking it with his own liquor and Snickers bars. Besides, he had lingering concerns she might misinterpret such a bold gesture and, after a briefly considering the idea, decided lopping off an ear wasn’t such a marvelous idea after all.